History of the Tower, Observers and Friends Group

See John Sasso’s “St. Regis Mountain – Beyond the Fire Tower” for history of the mountain before the tower.

In April 1910, an observer was stationed on St. Regis Mountain.  Because fires atop the mountain (and associated erosion) created an open view, no tower was needed.

Five letters that provide some insight into the establishment of this station date back to  March 17, 1910, February 24, 1910, March 15, 1910, June 28, 1916 and in July 3, 1916. During this first year of use three miles of telephone line were constructed so that the observer could quickly report fires spotted to the local forest ranger. There is no evidence that a tower was ever built on St. Regis until 1918, when the Conservation Commission erected a 35′ Aermotor LS40 steel tower that still remains there today. See A History of Aermotor Towers by Fred Knauf.

George F. Brown was assigned as the first observer on St. Regis Mountain.  In his first year he reported 55 fires, of which a few were dangerous. On the afternoon of May 31, 1915, a small fire, that was probably left by fishermen in the town of Santa Clara, was fanned by swift winds. The fire destroyed 1,550 acres of state land, most of which had been burned from a previous fire.

This photo is of Leander Martin, an observer in 1940. See Tower Observers page for more information on all the observers.

By 1916 each observation station included a cabin for the comfort of the observer. Previously, most were provided only tents for shelter. These original cabins were usually constructed of logs cut on site. Most were small and less than ideal. In the early 20’s a standard design would be developed.The first standard design for observer cabins was developed in 1922, mandating that they be 12′ x 16′ in size and roofed and sided with asphalt shingles. These consisted of a small living area, and even smaller bedroom and a pantry. A cabin of this design was erected in 1925 though, to date, there are no pictures existing of it.

Because of the cramped conditions in these earlier cabins, a new design was adopted in 1936. It increased the size to 16′ x 20′ with a 7′ porch. These had waney edge pine siding, pine board interior and a large fire place. 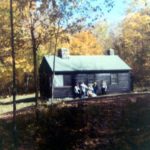 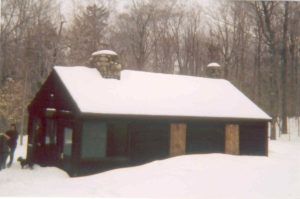 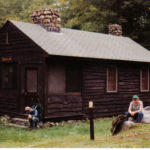 In 1919, a “device known as the Osborne Fire Finder” was developed by the US Forest Service. By means of this type of alidade (a mapping instrument used for determining directions), a panoramic map of the territory visible from a mountain station could be developed. A map and table were installed on St. Regis in that same year to aid the observer in locating fires. This was a circular map with a panoramic sketch of the surrounding vista around the outside edge. The inner portion was a topographic map with the tower location in the center. The alidade pivoted on a pin in the center of the map. Along the outer edge of the topographic map portion are azimuths that could be easily read by the observer once the alidade was sited on a possible fire, and then reported to the local forest ranger.

During the 1930’s the Conservation Department began to experiment with two way radios to improve communications between its fire towers and forest rangers.

80 Years of Continuous Use

St. Regis Mountain was staffed continuously from April 1910 through 1990 making it not only the longest operating fire tower in the Adirondack Mountains, but the longest operating fire tower in the State of New York.  Unfortunately for the towers, newer technologies were cheaper and better at spotting fires. In the last years of operation, the percentage of fires reported by fire tower observers dwindled to a mere 4% of all fires reported.

In 1988, the Department of Environmental Conservation concluded that towers were no longer necessary and decided to phase them out of service. The 1989 plans called for staffing six to eight of the thirty one towers staffed in 1988. Finally in 1990, the last of the operating fire towers in New York State – including St. Regis – were closed. This brought to an end an era of organized and systematic forest fire detection that lasted 82 years.

The Tower – from closure to RE-opening day

Following abandonment by the Department of Environmental Conservation in 1990, the tower began to deteriorate. Eventually the structure became unsafe, and the lower stairs were removed to prevent public access.

At this same time, grass-roots movements sprung up among locals and visitors to save the St. Regis Mountain fire tower, as well as other fires towers throughout the Adirondacks. Although this narrative summarizes the battle for St. Regis Mountain Fire Tower, the fate of Hurricane Mountain Fire Tower is closely linked because both were considered nonconforming structures by the Adirondack Park State Land Master Plan. The St. Regis fire tower faced additional road blocks regarding governmental regulations. St Regis Mountain is in the St. Regis Canoe Area, a land use designation in which fire towers are considered non-conforming structures.. Therefore, the fire tower was slated for removal.

In July 2005, David Petrelli wrote to the APA commissioners notifying them of the towers registry as a historic site and reminding them of the more than 2500 signatures which had been collected on a petition to save the tower.

On April 6, 2006, the Department of Environmental Conservation (DEC) Unit Management Plan (UMP) for the St. Regis Canoe Area faced its initial review by the APA with the fire tower being the highest profile issue. The preferred management alternative selected for implementation called for the development of “a comprehensive Adirondack fire tower management plan.” It further stated that “the Department will work with the APA in the development of this plan through a process that includes public involvement. This plan will address all State owned fire towers in the Adirondack Park. Until this plan is completed the fire tower on St. Regis Mountain will not be removed. “It appeared that the St. Regis fire tower had gained a reprieve, but it was short lived.

Excerpts from a draft DEC memo containing comments and recommendations dated May 4, 2006; “Staff believe that due to its closure in 1990 it is clear the tower no longer serves any essential purpose as defined by current Master Plan guidelines and criteria. Consequently, staff recommend that any action contained in the proposed comprehensive fire tower plan concerning the future of the Saint Regis Fire Tower should be incorporated in a UMP amendment for the review by the Agency. Staff further recommend that if no UMP amendment is approved, then the Saint Regis Fire Tower should be removed within three years of approval of this unit plan since it will continue to be a non-conforming structure in the Canoe Area. Staff also recognize the other alternatives of the comprehensive study could include either relocation or a revision to the Master Plan.”

It was not until February 2010 that the DEC released the Fire Tower Study stating “the St. Regis Mountain Fire Tower in the St. Regis Canoe area should be removed in conformance with Master Plan Guidelines”.

The minutes of the APA’s May 11-12 meeting state that “the Agency unanimously adopted the revised draft resolution finding the St. Regis Canoe Area Unit Management Plan in conformance with the general guidelines and criteria of the Adirondack Park State Land Master Plan, except with regard to final action on the St. Regis Fire tower, to be further clarified through a proposed comprehensive study of fire towers…”It now appears that the Department of Environmental Conservation has one year from the date of adoption of this plan to develop a comprehensive plan for fire towers within the Adirondack Park. Should no such plan be developed or should a plan not meet the future approval of the APA, the St. Regis Fire Tower would be destined for removal in three years. According to DEC this Fire Tower would not be removed during peak summit use months or during Thrush mating season, so likely removal would not happen until late fall of this year.”

A series of public hearings was held by the APA at which virtually every person spoke in favor of saving and restoring the towers with only a few environmental groups in favor of the tower removal. One of the most eloquent and determined supporters of the fire towers was Steven Engelhart, executive director of Adirondack Architectural Heritage (AARCH.) Numerous articles appeared in local and regional newspapers and on-line surveys reported responders overwhelmingly in favor of saving the towers.

Finally, in October 2010, in a rare move, the state APA’s Board of Commissioners voted to classify land beneath fire towers on St. Regis and Hurricane mountains as historic, which would let the structures remain and be restored. In December 2010, in one of his final acts before leaving office, Gov. David Paterson approved the state land classifications recommended by the Adirondack Park Agency for state lands inside the Adirondack Park.

In May 2013, the friends of St. Regis Mountain Fire Tower were officially organized and later that year, the Fire Tower Inspection Report from a state engineer was made available. The DEC stance changed from “… fire towers in wilderness, primitive and canoe areas are deemed nonconforming and must be removed” to “they are more valuable in a restored condition rather than being dismantled.”

At long last, on November 7, 2014 DEC Commissioner, Joe Martens issued the final Saint Regis Mountain Fire Tower Historic Area (SRMFTHA) Unit Management Plan which would allow restoration of the tower to proceed. In May 2015 a Volunteer Stewardship Agreement (VSA) between the DEC and the Friends group was signed. A survey for Bicknell’s thrush was completed by Paul Smith’s College ornithologist Brian McCallister and his students. No indication of the presence of Bicknell’s thrush was detected by this survey which cleared the way for construction efforts.

Meanwhile a detailed parts list was prepared in joint collaboration between DEC Forester Steve Guglielmi and the Friends and the first supply flights to the summit occurred in August 2015.

The Aquatic Watershed Institute (AWI) of Paul Smith’s College provided a summit steward to be on the St. Regis summit every Friday during the summer 2015. In September, Friends, volunteers and the Student Conservation Association (SCA) worked for a week on the mountain summit installing railings, stairs, landings, safety fencing and replacing the floor of the cab.

Donations, large and small, from numerous supporters of the tower renovation allowed the Friends to contract with David Vana of Davana, LLC  in Bloomingdale, NY to remove the old roof, fabricate new parts and assemble them on the tower. In July 2016 the new roof was flown to summit and debris from the fall of 2015 work was removed. In a two day effort, the old roof was removed and the new roof was installed.

The AWI of Paul Smith’s College again provided a summit steward to be on the St. Regis summit every Friday during the summer 2016 season to educate the public about the fire tower and the flora and fauna of St. Regis Mt. In August 2016, Friends David and Eryn Petrelli and Dr. Ed Hixson painted the cab, inside and out. September 1, 2016 FOSRMFT members Doug Fitzgerald, Jack Burke, Bob Brand and Rich LaBombard spent the day installing window frames, the safety railing in the cab, and putting up the occupancy sign. These actions allowed the tower to be open to the public for the first time in 26 years!!!

Go to the Restoration page to see the up-to-date work on the St. Regis Mountain Fire Tower.

I was at St Regis yesterday. Fortunately very little trash on the summit (I bagged a few things I saw). Unfortunately this graffiti in the cab is recent. FYI ... See MoreSee Less

Last year contractor Mike Vilegi installed new cross braces on the St. Regis tower. This year Mike has been busy with a number of projects, including this replica tower. ... See MoreSee Less

Just a reminder that bling is available. ... See MoreSee Less